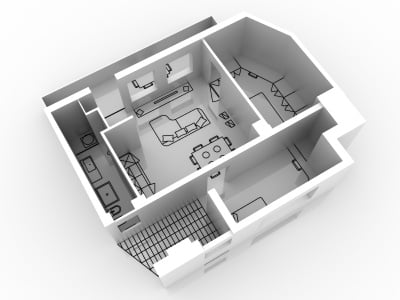 The trial of the action lasted 42 court days and involved nine lawyers representing the parties. I was one of many expert witnesses called to testify on some of the legal issues in the dispute.

In September 1997, Kelly Jean Rainville signed a Purchase and Sale Agreement to purchase one of the 39 condominium townhomes at the Grand Harbor complex on Lake Shore Blvd. W. in Toronto.

Richard Weldon was one of the developers of the project. He purchased one of the townhouses for $ 402,366.09 from the court-appointed official receiver when the development ran into financial difficulties. The Weldon unit was finished as a two story unit, with an attic above the second floor and a basement below the ground floor.

The following spring, Weldon began construction to expand the unit in the attic. The area added to the third floor consisted of a new staircase, new windows and skylights, a bathroom, a living area and a bedroom, totaling 862.2 square feet.

When the condominium corporation was registered in 1993, the land surveyor’s floor plans filed with the land registry office did not take into account the finished attic. The plans showed that the upper limit of the townhouse was the ceiling of the second story. No action was ever taken to change the declaration of co-ownership and plans to legalize the construction of the attic on the third floor, which would have converted it from common elements into part of the unit below.

Four years after moving in, Weldon sold the unit in Rainville for $ 975,000. The certificate she obtained from the property managers as part of the purchase indicated that there had been no continuing violation of the declaration of co-ownership, bylaws or rules.

In January 1998, Rainville went to his lawyer’s office and met with a paralegal to review and sign the closing documents. Although she felt like she owned the ceiling from the third floor to the basement, she was not shown any condominium plans.


Prior to moving in, Rainville began a $ 700,000 renovation to the townhouse. During construction, it was discovered that there was mold on the third floor due to a water leak through the roof. The condominium board and property managers got involved in fixing the water issues, and it was quickly revealed that the third floor of the townhouse had been built in the attic without permission from the condominium company.

In 2001, Rainville sued his lawyer, the condominium company, the property manager and two of his employees, as well as several individuals who served on the condominium board at various times.

In her claim, Rainville asked for the attic to be legalized as part of her unit, approval of the work she had done and significant damage to the cost of renovating and repairing the unit.

The trial took place before Madam Justice Darla A. Wilson in late 2009 and early 2010. I was one of the expert witnesses called to testify as to whether Rainville’s attorney was negligent in his judgment. not showing him the horizontal and vertical plans, which would have revealed that the third floor was not part of the townhouse.

In my opinion, the Rainville attorney’s clerk was negligent in failing to show the buyer the horizontal and vertical floor plans of the townhouse. In a detailed 69-page decision, Wilson agreed with my opinion and ruled that the law firm had indeed been negligent.

The law firm was ordered to pay Rainville almost $ 300,000 in damages, plus closing costs and the cost of renovating the third floor.

Unfortunately, the legal costs associated with the participation of nine lawyers in a 42-day trial far exceeded the damages awarded. I guess the combined legal bills were in the millions of dollars.

Sometimes in a dispute no one wins.

Editor’s Appeal: In today’s world, you are no one until Facebook likes you. So if you like to read the Move Smartly blog, scroll to the top of the blog and click the facebook “Like” button just under the Relaosophy logo on the right (under the subscribers box). And thank you for the love!

Bob Aaron is an independent lawyer with the law firm Aaron & Aaron in Toronto and a member of the board of directors of Tarion Warranty Corp. Bob specializes in the areas of real estate, corporate and commercial law, estates and wills, and landlord / tenant law. His Page title the column appears on Saturday in Toronto Star and weekly on Move intelligently. Email [email protected]

2011-09-06
Previous Post: Where Floor Plans Are Wanted and Why
Next Post: Check out floor plans for BATMAN, THE FLINTSTONES, FRIENDS, SEX AND THE CITY and THE BIG BANG THEORY TV houses