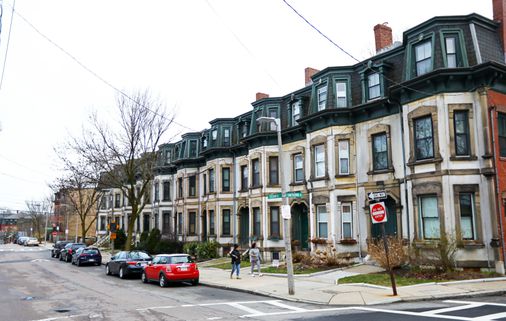 “It’s quite rare to have so many different styles of architecture from so many different eras in one neighborhood,” said Andrew Shelburne, a member of the Highland Park Study Committee. “We have buildings from the colonial period, and then we have energy-efficient buildings that are a model for how Boston should move forward.”

The designation would create a commission of two members and two alternates of Highland Park and three Boston landmarks Commission officials, who would advise on developments in the area, would monitor the use of its open space and review any exterior changes to buildings in the area.

Proponents say the designation is long overdue in a neighborhood that has faced significant gentrification for years and, as the study report notes, lost gems such as the Roxbury courthouse early on. from the 1970s and an 1850s Greek Revival cottage in 2016. They say other neighborhoods wouldn’t wait — and have not waited — so long for such protections.

“It’s the economy and racism,” said study committee member Ernest Coston, who has lived in Highland Park for five decades.

The Landmark Commission’s study report details the history and evolution of the neighborhood.

The neighborhood’s architecture reflects the many communities that have called Highland Park home over the centuries. Once a forest home to the people of Massachusetts, the area has over time been home to early American settlers, enslaved and free blacks, abolitionists and activists. Jewish communities, Latino immigrants, and blacks from the American South have dominated the neighborhood at different times in its history. The racial, ethnic and class diversity found in Highland Park today speaks to this varied history.

Despite development pressures that have eaten away at some of its rich history, much has survived: The Dillaway-Thomas House on Roxbury Street, a yellow, wood-framed single-family home reminds visitors of Highland Park’s role in colonial America. The Marble Block on Cedar Street features one of many examples of multi-family living.

Unlike many flat, dense neighborhoods in Boston, Highland Park has a varied topography with a number of parks and other green spaces. Stone features such as mile markers, retaining walls, outcroppings of Roxbury puddingstone, and artwork such as the Black Jesus statue in Highland Street define the area.

Despite its many assets, the district has been the victim of disinvestment in the 1970s and 1980s, making it an easy target for developers hoping to rehabilitate old buildings in Boston’s lucrative real estate market.

“It’s like we’re fighting greed,” Shelburne said. “It’s a violent process that ends in destruction of our neighborhood.

Boston has not created an architectural conservation district since the Fort Point Channel Landmark District was designated in 2009. The Boston Landmarks Commission accepted a petition to consider giving Highland Park this designation in 1978, but nothing came of it. The National Register of Historic Places added Highland Park to its registry in 1989, but, as residents have discovered, this does not prevent demolition or other alterations to buildings in the neighborhood.

“We thought a historic district would provide money for people to fix up their properties and prevent them from being torn down,” Coston said. “We didn’t know it didn’t work like that.”

If approved, the Conservation District will monitor demolitions or developments that threaten the neighborhood’s unique layout, preserve its vast green spaces and slow the movement of residents. The commission should approve proposals for demolition, major architectural or landscape alterations, and new construction visible from the street; typically, these commissions work with applicants to refine projects that have concerns, the city said. The proposed neighborhood would be different from entities like the South End Landmark District, which places restrictions on certain changes residents can make to their homes.

“What we’ve designed is unique to Highland Park,” said Highland Park Study Committee Member Jon Ellertson. “It was designed to meet the needs of our neighborhood as we heard them.”

Study committee member and community organizer Andrea Cáceres said she wanted the designation to give residents more influence over the preservation and development of affordable housing. Still, she says, she’s glad it allows residents to have more to say in the way Highland Park changes over time.

“The neighbors will have the power to negotiate on what will be done,” Cáceres said.

Shelburne said he hopes their proposal will inspire other neighborhoods to pursue a preservation district.

Kate Phelps, co-secretary of Highland Park Neighborhood Coalition, and who has lived in Highland Park for over 20 years, okay; she said she hoped Mayor Michelle Wu will take a different approach to development that threatens to strip the city’s neighborhoods of their unique characteristics.

“She signals a new attitude to reshape the development in a neighborhood-friendly way,” Phelps said.

The Reverend Mariama White-Hammond, Boston’s chief environment, energy and open space officer, said she was excited about the opportunity to tell not just one part of Highland Park’s story, but “layers of history” that bring together Aboriginals, abolitionists and workers. class stories in the foreground.

“This is part of our efforts to move historic preservation from a predominantly white space to something much more accessible, inclusive and expansive,” White-Hammond said. “Getting them across the finish line is just the start.”

Residents can submit written comments to the review committee until Tuesday, April 12, when the committee will hold a public hearing on the proposed designation. The committee will then issue a final report. If the landmarks commission, city council, and mayor’s office approve the designation, the mayor will appoint the new district commission.

Tiana Woodard is a member of the Report for America body that covers black neighborhoods. She can be contacted at [email protected] Follow her on Twitter at @tianarochon.

2022-04-09
Previous Post: Highway construction will close Wild Horse Pass Motorsports Park after nearly 40 years
Next Post: See the interior of the skinniest skyscraper in the world