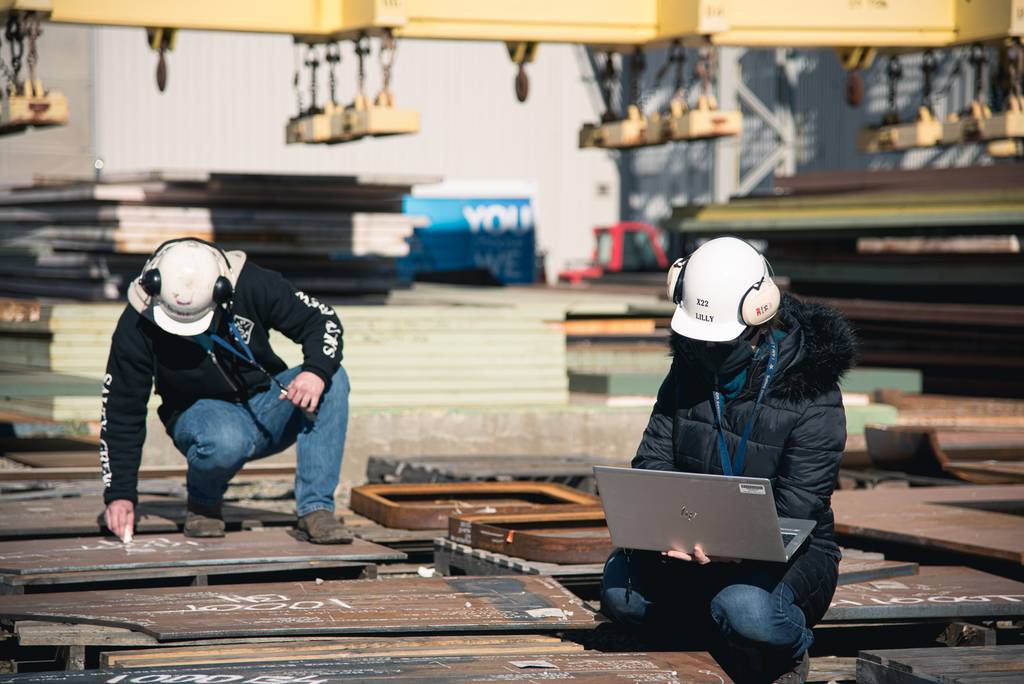 Brian Fields, vice president of carrier construction for CVN-80 and CVN-81, told reporters Feb. 18 that the company has a build plan on the Gerald R. Ford, but lessons learned are dragging down costs and timing as the company works through the John F. Kennedy and now the Enterprise.

A lesson concerns crane lifting of large modules or supermodules. Given the vastness of aircraft carriers, labor constructs the steel framework of the ship’s segments, which can then be fitted with pipes and cables. These modules are then lifted by crane and placed on the hull.

Fields said the company has learned to use even larger supermodules, thus requiring fewer cranes to get the pieces into place.

“Some of our super lifts [on Enterprise] have incorporated what on [Ford and Kennedy] were in some cases 10, 15 erections with a crane – building a large supermodule,” he said. “We’re seeing a lot more opportunities to gear up earlier in the build process, which offers a lot of efficiency just based on where the work is being done.”

Fields said the company also tries to group steel structures into “unit families,” where the parts are not identical but similar enough that lessons can still be applied from part to part. The sequencing on Ford and Kennedy had been based on which pieces of steel were needed and in what order to form modules that could be stacked in the correct order. The new changes on Enterprise mean some steel parts are built early to need them – but Fields said “localized learning” could occur when similar parts are built consecutively in a “batch manufacturing process”.

Fields said the company is seeing similar learning among its 2,500 suppliers across the country.

But, he noted, one driver of supplier learning is the stability that comes with the Navy’s two-carrier purchase of Enterprise and the Doris Miller in 2019. Fields said Newport News Shipbuilding and the Navy were in talks about how to purchase and finance aircraft carriers in the future to maintain this optimal build schedule and the industry-based hull-to-hull learning created from the two-ship contract.

Fields also noted that the Ford class was designed in a digital 3D environment, rather than using traditional blueprint drawings. The associated step-by-step digital work instructions were not ready for the first two ships, so Ford and Kennedy were built by craftsmen using paper drawings derived from the digital plans – although Kennedy was used for experience the first digital work instructions and get feedback from employees.

Starting with Enterprise, shipyard workers used laptops with digital work instructions for each step, complete with 3D images that can be zoomed and rotated.

“It gives the mechanics a much clearer picture of what they are supposed to be doing. This helps with the quality of the first shot. It helps young artisans, who sometimes we find it takes as long to learn how to read drawings as it does to develop craft skills,” Fields said.

Enterprise and Doris Miller will be built entirely with these digital work instructions, a first for the Navy.

Fields said the Navy has invested significantly in the development of the 3D product model and digital work instructions, as they will be the basis not only for the construction of aircraft carriers and submarines in Newport News, but also life-cycle maintenance work at the Navy’s four public shipyards.

Fields said Newport News Shipbuilding has made a “generational investment” in purchasing laptop computers for all hourly workers so they can access digital work instructions. But, he said, the investment produces other benefits, giving workers immediate access to resources such as procedures, troubleshooting manuals and more, as well as greater access to their supervisors.

These same tools and processes will be used to build the Columbia-class ballistic missile submarine and the next-generation SSN(X) attack submarine. Future ship classes will all join this same digital environment, Fields said.

Megan Eckstein is a naval warfare reporter at Defense News. She has covered military news since 2009, with a focus on US Navy and Marine Corps operations, acquisition programs and budgets. She has reported on four geographic fleets and is happiest when recording stories from a ship. Megan is an alumnus of the University of Maryland.