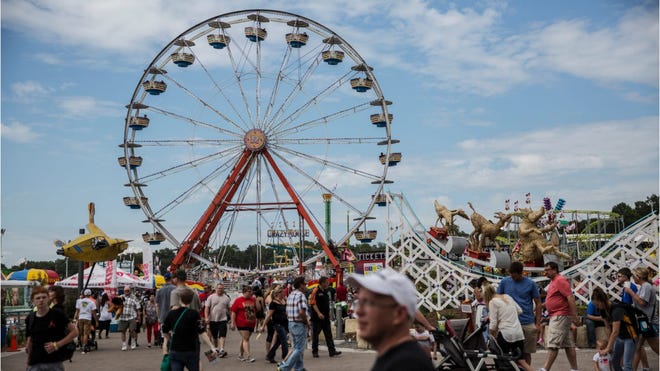 Residents of Des Moines’ North Side got a glimpse Thursday of what a new recreation center could include as the process of finalizing a plan for an upgraded Grubb Center continues.

The public forum was the fourth of six planned community meetings, which are hosted by the city and Chicago-based architecture firm Latent Design and designed to include residents in the planning process for the project.

These ideas included wanting the facility to include a swimming pool, multipurpose rooms, an updated exercise space, and spaces for nonprofits and other community organizations.

Following:Des Moines residents share their hopes for a new recreation center on the city’s north side

The four plans that were presented blended these ideas together to show what was possible within the project’s $12 million budget.

Katherine Darnstadt, principal architect at Latent Design, pointed out that the plans were like sketches of “what could be” to give residents a general idea of ​​the possibilities available to them.

Two of the plans showed possibilities for a renovated version of the current building, while the other two focused on what was possible from scratch.

At the request of several residents who offered to renovate the 44,000 square foot facility instead of building a new one, Latent Design presented two options focused on preserving the original facility.

In these plans, the company said that almost 70% of the project budget should be allocated to the maintenance of the building. These expenses would cover a new roof, a new elevator, mechanical and electrical upgrades, and other improvements to the base site.

With the remaining 30% of the budget, one of the plans placed greater emphasis on “finishing upgrades”, such as new floors, paint, ceilings, and recreational equipment. The current pool would receive necessary repairs, without major upgrades.

The other plan includes a gut rehabilitation of the current pool, leaving nearly 15% less funds for other facility upgrades.

New construction would mean a smaller building, but more flexibility

The two remaining proposals showed what is possible with $12 million spent on a brand new building.

A strategy focused on fitting as much programming into the budget as possible, resulting in a 21,500 square foot facility with no pool. However, it gave way to many community rooms for child care, a computer room, a teen center and other social services.

This plan also showed that it allowed for additional square feet that could be devoted to an NCAA-sized basketball court, a 3,000-square-foot weight room, and other multi-purpose rooms — just “one thousands of (potential) combinations,” Darnstadt told those in attendance. .

The final strategy called for the smallest building footprint, at 19,000 square feet, and included a pool at the expense of space for programming. This plan includes plans for a basketball court and weight room, just on a smaller scale.

Most are in favor of the 4th approach, but ask for more equipment

In a vote among attendees at Thursday’s meeting, a majority expressed interest in the fourth strategy, but with a desire to see more equipment added to the plan, which would cost more than the $12 million budget. dollars from the project.

“Maybe $12m is a starting point – but that’s the floor, not the ceiling…I thought that was a good number, but why not dream more?” said Clinton.

Parks and Recreation Director Ben Page previously said the department heard from several donors interested in contributing additional funds to the project. Page also told the Register that it may be possible for more funds to be directed to the project through the $95 million the city will receive as part of the federal government’s US bailout.

Residents also urged the city to provide usability data from past years at the next meeting to identify the most important programs for inclusion in the final plan.

“Please consider what the next generation is going to use,” Des Moines parent Luis Arredondo told organizers. “I think we have to define who it is for and what their needs are.”

The next meeting is scheduled for 5:30 p.m. on Thursday, February 17 at the Grubb YMCA. This will be the last meeting before the presentation of the final recommendations.

To watch previous presentations or submit feedback to the city and Latent Design, visit dsm.city/business_detail_T6_R277.php.

Melody Mercado covers the Des Moines city government for the registry. Join her at [email protected] or Twitter @melodymercadotv.