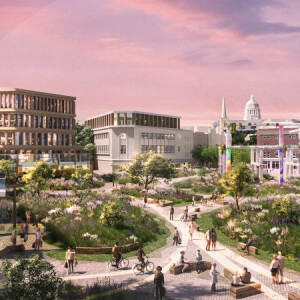 A vision by Thomas Heatherwick to revitalize the ruins of a half-demolished shopping center has been approved.

The designer who created the 2012 Olympic cauldron is looking to redevelop rather than demolish the dilapidated Broadmarsh shopping center in Nottingham, which was handed over to city council when Intu took office at the start of the Covid pandemic -19.

Nottingham City Council has established an independent advisory group to build on the success of the council’s ‘Big Conversation’ consultation to reinvent the abandoned Broadmarsh shopping center. Heatherwick Studio, run by world-renowned and highly acclaimed British designer Thomas Heatherwick, and Stories, a socially responsible development company, were tasked with working with the advisory group on the creative vision for the city center site and advising on how Nottingham can deliver the project.

The Advisory Group believes the new vision gives Nottingham a ‘once in many generations’ opportunity given the size, scale and position of the site and would provide social and economic opportunity for Nottingham on a historic scale and unprecedented. The development, which the advisory group says will take ten years to be fully delivered, will generate 3,000 construction jobs and 3,000 new jobs once development is complete and will create more than 750 new homes and over 400,000 square feet of construction. high-end businesses and offices. space.

The key elements of the Vision:

Thomas Heatherwick said: â€œThe challenge of what to do with the old Broadmarsh shopping center was a time to reflect on the failure of our city centers. They should aim to bring people together, not just about retail. Rather than demolishing the structure, we propose to keep the framework and breathe new life into it, creating a place that can contain the diversity and vitality that are so lacking in many city centers.

â€œThe goal is to bridge generations, communities and cultures so that the new Broad Marsh can reflect the true diversity of the city.

â€œIn the fog of Covid-19, Nottingham seized the opportunity to create a new master plan for the future of city centers. “

Cllr David Mellen, Head of Nottingham City Council, said: â€œI want to thank the Advisory Board, Heatherwick Studio and the Stories team for their creativity, hard work and ambition. When Heatherwick Studio was commissioned to create a new vision for Broad Marsh, there were some key things I wanted to include. I think Thomas and his team accomplished them all.

â€œThey clearly listened to the comments of the great conversation and captured the wide range of perspectives and ideas brought to the fore in what has been the board’s largest engagement exercise to date. They used Broad Marsh’s vast footprint to make sure the Vision offers something for everyone.

â€œIt includes substantial green space via a ‘green heart’ at the center of the vision. It will create more than 750 homes and 6,000 jobs for the local population. By proposing to use the existing framework, to reduce waste and carbon emissions from new constructions, it is sustainable, which is very important for the city’s ambition to be the first carbon neutral city in the UK. United by 2028. And it respects and promotes the city’s rich heritage by opening up views of the castle, showcasing the caves, one of the city’s hidden gems, and restoring old street patterns. .

â€œNow we will begin the important work required to test the new vision and our ability to achieve it. We have always said that this is not something the board can or would like to do on its own. We will continue to work with colleagues from the advisory group to develop a master plan for the space and secure the necessary investments from public and private sector partners. It will take time, but people will soon see major changes with the opening of the area between Collin Street and Lister Gate as part of the creation of the â€œGreen Heartâ€.